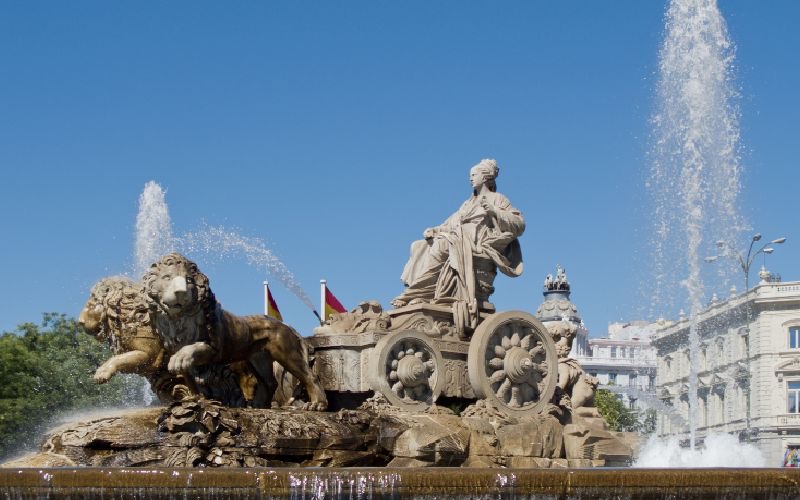 Hey Innsiders! I just came here today to talk about an interesting tradition: throwing coins in fountains all over the world. That’s why I had to recommend you some places where enjoy serenity and the beauties and throw some of your change

One of the greatest way to spend your afternoon afternoon in Madrid is to have a coffee and a piece of cake at a picnic in one of the wonderful parks where these fountains are usually located. So why not make a few wishes with the change we have left?

Not every fountain is located in a park, but you will always find a nice terrace or rooftop where you can contemplate the views of the city and these wonderful monuments.

The Fountain of Neptune

The fountain depicts the God of the sea, Neptune, with his trident perched atop a chariot pulled by two magnificent sea horses, also called hippocampi, which represent storms and power. The statue is exquisite, and the fountain is located in the center of a roundabout in Plaza Canovas del Castillo. Originally it was placed opposite the Cibeles fountain, but later was moved.

Featuring two lions before a chariot, which the Roman goddess of fertility and agriculture stands on. The fountain is centered in Plaza de Cibeles, surrounded by many of Madrid’s most important institutions.

This fountain is also known for being the meeting place for the fans of Real Madrid, after the victories of an important soccer game.

The fountain of Apollo is a representation of progress and development for Madrid. The majestic Apollo carries a lyre, and the surroundings of the fountain feature elements from each of the four seasons.

A major touristic area, the fountain is located on Paseo del Prado. Near a beautiful park, here you can breathe in the fresh, crisp air while relaxing.

One of the best walking paths in Madrid, you can find the Galapagos fountain in Retiro Park. Dedicated to Isabel II, three fairies are shown to be bringing gifts and good fortune to the future princess. Four children riding dolphins are also depicted in order to represent knowledge and wisdom.

The Fountain of the Fallen Angel

The Fountain of the Fallen Angel is literally the only one of its kind, as Madrid is the only place with a fountain dedicated to Lucifer’s fall from Heaven. You can view this beauty in Retiro Park, along with the Galapagos Fountain. The base of the fountain depicts animals associated with the Devil, lizards, fish, and snakes, as well as demons.

Posted in Uncategorized
← The best art museums of Madrid